I wouldn’t ordinarily consider myself a reader of the Young Adult genre but I received an uncorrected proof of Ali Benjamin’s debut novel, The Thing about Jellyfish, and it intrigued me enough to make me want to participate in the SA blog tour publicising the release of the book. I’m so glad I did.

The Thing about Jellyfish tackles a topic that has been very near to my heart this year in particular: how we deal with grief. Suzy, the protagonist of the book, learns that her best friend, Franny, has drowned during the school holidays, and struggles to understand how this could have happened when Franny was such a good swimmer. I think we can all relate to that feeling of disbelief when a loved one dies, and Suzy channels that universal desire to make sense of loss by going on a quest to prove that Franny was in fact killed by a rare jellyfish sting.

Benjamin’s writing is lovely and we really feel a connection with Suzy as she tries to find a way to navigate her world. Not only is she dealing with the loss of a friend through death, but also the loss of stability as she begins to negotiate the often difficult waters of the pre-teen years. Suzy doesn’t quite understand the sudden obsession with boys and lipgloss, and she is deemed to be ‘weird’ by her peers, a designation not helped by her newfound interest in jellyfish and her disinclination to speak after the death of Franny. There are a number of lessons to be learned about acceptance on various levels in this novel, and they are tackled with sensitivity, without being cloyingly sentimental.

Suzy’s narration flips between the present day and the past, so that we get a real sense of what her friendship with Franny was like, and how that friendship had evolved as they got older, and Franny started to change. This evolution also lead to the book touching on another common theme when dealing with grief – the guilt those left behind feel about things left unsaid or undone because they didn’t know they were out of time. But I think my absolute favourite message of the book flies in the face of the commonplace. So often when someone we love dies, we get patted down with the “everything happens for a reason” platitude. When Suzy learns of Franny’s death and questions the sense of it, her mother replies that “Sometimes things just happen.” This proves to be too difficult for Suzy to initially accept at face value, but I absolutely love the honesty of that. Because sometimes things do just happen. There is not always a reason the people we love should die, but they do. There’s an almost zen-like sense of peace when you realise that and stop searching for a greater explanation than what’s right in front of you. And in the end, it’s all about finding a way to achieve some sort of closure, however you do that. As Suzy says, “There’s no single right way to say goodbye to someone you love. But the most important thing is that you keep some part of them inside you.”

The Thing about Jellyfish is aimed at young readers aged 12 and up, but many adults are likely to enjoy this sweet, easy read as well. I would certainly recommend it for anyone in their early teens who is dealing with loss or struggling to fit in. What’s more, the depth of research into jellyfish is incredible, and that alone makes it worth reading. A really lovely debut. 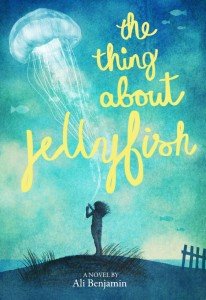 For the rest of the posts on the SA blog tour, you can visit: