An ode to the Alzheimer’s Cat, & what came next

It’s taken two years for me to be able to write this post. Let me just say this – 2013 was a bitch of a year. It started out with such promise, what with the happy occasion of the sister person moving back to South Africa on New Year’s Day, but then somewhere along the way it spiralled into a debacle of misery and loss. And the first loss happened on the 14th of January, when I had to make the crushing, but inevitable, decision to let the Alzheimer’s Cat go.

It’s possible that people who have never really connected with an animal will not understand how truly awful this loss was. I mean, your cat dies, you just get another one, right? Not so much. My heart was broken into itty bitty pieces and I still miss her crazy personality. And what a big personality it was. It all started in 1993 when my gran discovered that three kittens had been born under her house. The mother disappeared, and I volunteered to crawl under the house to find the abandoned babies. A bold move since I’m claustrophobic, but hey. It was dark and cobwebby, and I had no idea how I was going to track the little mites down. But as I crawled further into the blackness, I could hear a kitten crying and crying. And that was Jude (her actual name, Alzheimer’s Cat came much later), leading me to the spot where she and her two sisters had taken refuge. The other two were quiet as can be, but she had plenty to say. Funnily enough, my gran decided to keep her, and we took the two siblings. After just a few days though, we got a call to say that Jude could not stop crying, and she must be missing her sisters. So she came to live with us too. It soon became apparent though that she was in fact just the chattiest cat that ever lived, and the ‘crying’ never stopped. She had an opinion on everything and she wasn’t afraid to voice it. My kinda girl.

People who have never had cats will tell you they are aloof and indifferent to their human slaves. While I suppose this may be true of some cats, I’ve never experienced it, and Jude was the most devoted pet anyone could wish for. She would sit at the gate and wait for me to come home from whatever teenage razzle I had been on, and this continued all through our almost 20 years together. Being the chatty Cathy that she was, she would go visiting while I was at work, and wherever I lived, neighbours would tell me how much they loved her, and how she would spend her days hanging out with them until I got home. That big personality drove me crazy sometimes, like when she was demanding food at 4am, with a well-placed claw to the tender skin beneath the eye, but it’s also what made her so quirky and unforgettable. She absolutely lived all nine of her lives to the fullest, surviving living with a pair of dogs that wanted to eat her, then later breaking pretty much every bone in her left front leg (so many reasons to hate fireworks!), which led to her getting a ‘bionic’ leg that she simply used as a weapon, as well as quite a few near misses with kidney failure. Before she broke her leg, she would go off adventuring, sometimes for a few days, causing me mild heart failure on more than one occasion, but after that incident, she was very much the homebody. The Alzheimer’s Cat nickname came about when our vet in Durban diagnosed her with a form of dementia and separation anxiety at the age of about 14 – she would pee on the bed because she didn’t want me to leave the house (cat logic) – and so she also got to be on kitty Prozac for a while too. Never a dull moment. In the end, though, it was her treacherous kidneys that ended her epic tale. 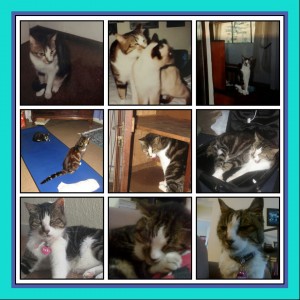 After she died, so many people told me to just get another cat, and I was flooded with well-meaning information about desperate cats seeking homes. But as far as I was concerned, I was never getting another animal. It’s just too hard to say goodbye. So convinced was I, that I even bought white bed linen. Certainly not cat-friendly in the slightest. For the longest time, I could still feel her presence in my house, and there was no way I was ‘replacing’ her with another cat. But then I started volunteering at the SPCA, and my heart broke for all the babies who were there, desperate for a chance to have a home. It still took me more than a year to decide that I was ready to adopt. Even when Violet and Henry came home, as much as I love them to pieces, for the first month or so, it felt like they were just visitors. Really, really precious visitors, but still. They spent a very long time at the SPCA before they came home with me, and so now we’re just figuring it out together. They’re not always sure how to live in a house – I’ve realised that if they get stuck in a bedroom (or if Henry gets put in the bedroom for time out), they haven’t figured out that they can just jump out the open window to escape and then get back into the house through another window. They also aren’t quite sure why there are silly things like photo frames on surfaces they want to walk on, so they just kick them out of the way. But what they do have all figured out is how to love. Despite their absolutely awful starts in life. And while I never thought I could love any cat as much as I loved the Alzheimer’s Cat, I’ve realised that I was wrong. They’re not replacements, but they are just as incredible as she was, in their own unique ways. So here’s to the next 20 years, replete with kitty paw prints on my white bed linen. 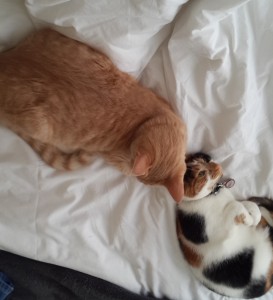 Getting Away from it All