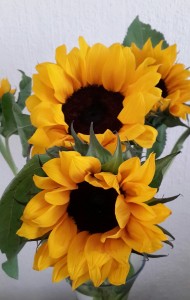 Let me just be clear from the outset. The people we love are not supposed to die at the age of 36. And I’m not even talking about those sudden, awful accidents that rip people out of our lives unexpectedly, I’m talking about illnesses that allow for hopes to be raised before crushing them into oblivion. Illnesses that we think are only supposed to take the people who have finished really living their lives, not the ones who should still have bright and shiny days of love and laughter laid out before them in a seemingly endless row. It’s so unfair and unfathomable that it makes me want to scream.

But it doesn’t matter. We can scream until our throats are raw and we feel dizzy at the emptiness left behind. It doesn’t change a thing. Cancer somehow infiltrates everyone’s lives. I don’t think I know anyone at this stage who hasn’t had a friend, a family member, a colleague – someone – that’s been affected by this truly shitty disease. The lucky ones find it early, fight it hard, and come out battered and bruised but still here to tell the tale. A more ferocious fighter than Farrah I don’t think there could be, but still, she was not one of those lucky ones. This is not the story of her fight though, because that’s not my story to tell. This is a (very much summarised) story of friendship. This is all the things I didn’t have the balls to get up and say at her memorial over the weekend (and I know she would totally have gotten that).

Farrah and I met when we were about 15. We didn’t go to school together, and yet we somehow managed to live in each other’s pockets for a good deal of our teenage and young adult years. I can’t think of that time without thinking of us going shopping for bell bottoms at the Greek shop on West Street. Dragging my duvet up the thousands of stairs at her house for yet another sleep over. Spending whole nights just dancing and laughing at Retro’s, going crazy when Dancing Queen came on. Lying around eating pizza, talking or watching movies. Lazing in the sun at Ansteys beach. Visiting friends who were working at a pizza place and Farrah sprinting down Bluff Road because she saw a gecko, while the rest of us collapsed with laughter. Adventuring down the coast when we finished school. Writing endless letters when we moved to different countries. Talking about boys and crushes, and then love and relationships and watching her fall so hard for Brad. Things weren’t always easy – there was sadness too, both real and the imagined angst of being young – but the overwhelming thing I recall when I think of the times we spent together is laughter and fun. Farrah could light up a whole room with her smile and her capacity for joy was infinite. It’s always felt like I had an extra sister, who was the same age as me and had lots of the same interests. No matter how far away we were from each other, we always found a way to stay in touch. It was impossible to be friends with her and not know how loved you were. And I have always sucked at expressing my emotions, but Farrah and I told each other how much we loved each other all the time. It is one of the things that brings me comfort because there is no doubt in my mind that she knew what her friendship meant to me, right to the very end.

When I thought I might be able to get up and speak at her memorial, before I got there and took one look at all the photos of her and knew there was no way I could maintain my composure, I tried to think of specific memories that I would share. There are so many (and some secrets can’t be given away even now!) but there are a few that really capture not just the fun that we had, but also the size of her heart. One night, Farrah and I were outside Joe Kool’s and a little street child of about 9 or 10 came up to us to ask for money. Farrah wasn’t content to just give her some change, and struck up a conversation, trying to make sure the little girl was okay. Somehow, in true Farrah style, this ended up with us teaching her all the words to Hey Micky, along with a little clapping routine. We were pretty impressed with ourselves as we walked away, listening to the little girl singing and clapping, sure we had just taught her a way to wow the tourists and make some extra cash.

The other memory that has really always stood out from the blur of laughing, talking, dancing etc that was our teenage years, involves Farrah and my little brother. He was chronically shy, so much so that he barely wanted to speak to the people in our family, so he certainly wanted nothing to do with anyone else. One Saturday morning I had to go to his preschool fun walk, and Farrah decided to come with. We were only around 16 so I’m sure she had a million more interesting things she could have been doing, but she was determined to make that child like her. And so when I started doing the walk with him because he was too scared to do it alone, she walked at his other side. He didn’t say a word to her the whole way through the walk. But he held her hand the entire time. That’s the impact she had on people. And when he passed away about a year later, she held my hand the entire time too.

When someone that we love dies, we have to find something to take away from it, or we’ll go insane. Farrah and I didn’t believe the same things, but as I always told her, I believed in her, and that’s what counted. She would tell all of us (and she told us this before she left) that life is short, and it can change so unexpectedly. We spoke about how sad it is that people wait until the bad stuff happens before saying the things that are in their hearts. So if you love someone, tell them. If someone is hurting you or bringing toxic energy into your life, release them. If you’ve always wanted to do something, what are you waiting for? When we were teenagers, running around Durban like well-meaning little hooligans, we were completely fearless. We thought we were invincible. Now we know we’re not. Don’t make the mistake of thinking you have all the time in the world…you might, but then again, you might not.

Farrah always had an incredible way of putting everyone’s happiness before her own – she even waited to tell most people how sick she was because she didn’t want to upset anyone. So I know she would not want us to be enslaved by our grief, as hard as that may be. She’d want us to see her beautiful heart in every sunflower and smile at the time we had with her, even if it was way too short. There aren’t really any words for how heartbroken I feel for her precious husband and daughter, and for her parents and sister, and all the people who have loved and lost her. But there’s a poem called ‘A Thousand Winds’ by Mary Elizabeth Frye that is pretty well-known and captures the essence of what I think she would want for us. I can also just imagine Farrah smiling at me ending with a poem, given that she always made fun of me for being a bookish grammar nerd:

Do not stand at my grave and weep.

I am not there. I do not sleep.

I am a thousand winds that blow.

I am the diamond glints on snow.

I am the sunlight on ripened grain.

I am the gentle autumn rain.

When you awaken in the morning’s hush

I am the swift uplifting rush

Of quiet birds in circled flight.

I am the soft stars that shine at night.

Do not stand at my grave and cry;

I am not there. I did not die.